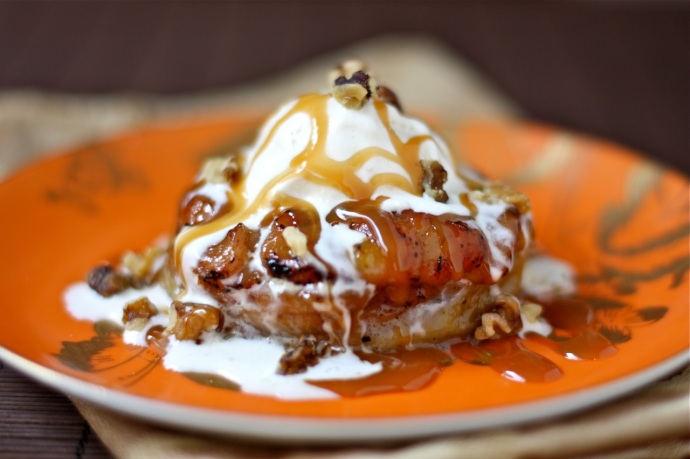 Tarte Tatin is a French upside-down tart primarily made with apples, and caramelized with butter and sugar until golden brown. It is usually made in a skillet and put over the stove top first to start the process of caramelizing the sugar and then finished in the oven. In this shortcut version from the October 2011 issue of Bon Appétit magazine, the apples are replaced by bananas and then baked in ovenproof crème brûlée dishes. I added some orange zest since I’ve been on such an orange kick lately and I knew that it would enhance the sweetness of the caramel.

I must admit I was slightly distracted while making this yesterday, trying to do two things at the same time. While the recipe called for brown sugar for a darker color and deeper caramel flavor, I missed the word “brown” and used granulated sugar instead. I combined the sugar and orange zest in my mini food processor and pulsed them together for a few seconds to release the oils in the zest. The resulting orange sugar was so fragrant and it really was a great addition. The recipe directions called for the tarts to bake for about 20 – 25 minutes, but after that amount of time, the bananas were not caramelized at all. The orange sugar/ butter syrup was runny and very pale in color, most likely the result of using granulated instead of brown sugar. I put them back in the oven for another 10 minutes, but they still were not at all brown like a tarte tatin should be. At this point, baking the tarts longer would overcook the puff pastries so I used my kitchen torch to brown the tops and sides of the tarts.

Well, I was definitely distracted because as soon as I put the torch down, I reached for the ice cream and placed a scoop right on top of the hot tart. Of course the ice cream melted almost immediately! After all, that’s what usually happens when ice cream is scooped on top of something that was just TORCHED!!! I placed the tart in the freezer while I ran around to set up my camera shot. I had to work quickly to drizzle the caramel sauce and sprinkle the chopped walnuts since my beautiful tarte tatin was now quickly becoming enveloped by a puddle of melting ice cream. Also, if I was really focused, I would not have piled my perfect concentric circles of bananas about 3 inches high in my ramekin, since I was making tartes tatins, not pies! The recipe called for 1-inch high dishes.

Well despite my lack of concentration, these banana tartes tatins turned out to be delicious! I really like the hint of orange with the caramelized sugar. The bananas were perfect, soft, but not mushy. This is definitely a winner in my book!

Place four 5-inch diameter, 1-inch high crème brûlée dishes (I used ramekins) on a rimmed baking sheet. Smear a tablespoon of butter in each of the four dishes. Combine the orange and sugar (in a food processor, if desired, to release more of the oils of the orange zest), divide evenly and sprinkle in each dish. Place overlapping slices of banana over the orange sugar in concentric circles to cover. Top each of the dishes with a puff pastry round, tucking in edges of the pastry.

Bake until pastry is golden and puffed and the filling is bubbly, 20 – 25 minutes. Cool slightly and carefully invert onto serving plates, being careful of the hot caramelized sugar.

Once the tarts are on the serving plates, top with a scoop of ice cream, drizzle with caramel sauce, and sprinkle some toasted walnuts.

© Daisy’s World, 2011-2012. All rights reserved. Unauthorized use and/or duplication of this material without express and written permission from this blog’s author and/or owner is strictly prohibited. Excerpts and links may be used, provided that full and clear credit is given to Daisy’s World with appropriate and specific direction to the original content.

© Daisy’s World, 2011-2014. All rights reserved. Unauthorized use and/or duplication of this material without express and written permission from this blog’s author and/or owner is strictly prohibited. Excerpts and links may be used, provided that full and clear credit is given to Daisy’s World with appropriate and specific direction to the original content.