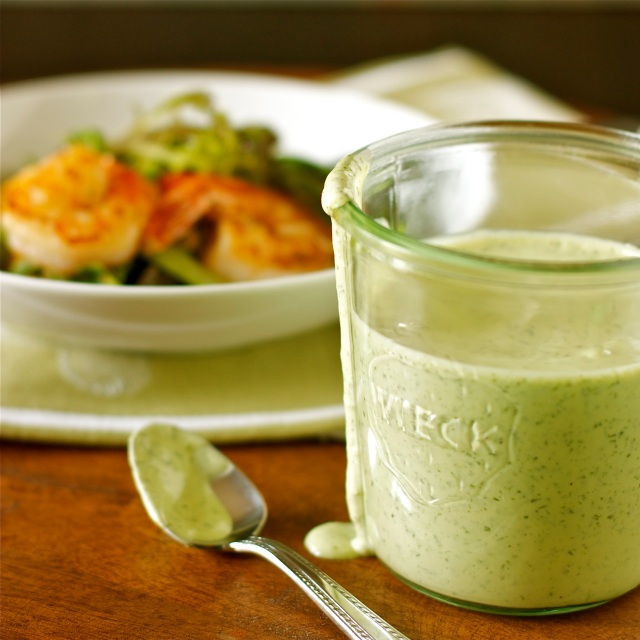 My husband and I just returned from a relaxing and fun-filled weekend in San Francisco. We had a wonderful time discovering new restaurants and revisiting old favorites, wandering around the city, and watching the Italians and Kiwis race for the Louis Vuitton Cup and the right to face Oracle/Team USA in the 34th America’s Cup which is being held in San Francisco Bay. I’ll be posting more about our trip later, but I wanted to share this recipe first.

While in San Francisco, we stayed at the historic “new” Palace Hotel, which opened in December 1909, at the site of the original Palace Hotel that was destroyed by the fires that ravaged the city after the infamous 1906 earthquake. I was looking through the historical displays that adorn the hotel corridors and learned that Green Goddess Dressing was invented there in the 1920s.  The hotel’s executive chef, Philip Roemer, created it for a banquet held in honor of actor George Arliss, who at the time was starring in William Archer’s hit play, The Green Goddess. 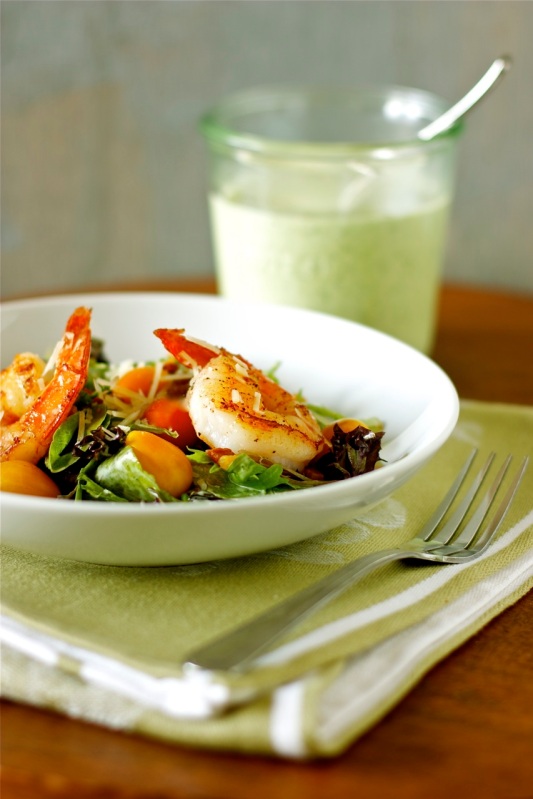 After learning of the dressing’s origin, I was pleasantly surprise to see it on the menu at Flour + Water, one of the new restaurants we tried over the weekend.  I jumped at the opportunity to try it and I was glad I did.  One taste of the fresh and creamy dressing and I was hooked.  In fact, I made it for dinner the night we got home.

It was quite easy to make, and, fortunately, I had an abundant supply of all the herbs I needed growing in my garden.  I used the original recipe from the Palace Hotel, but added some tarragon which I thought would work well with the other herbs.  Tarragon adds an unmistakable anise and fennel flavor, which is perfect in this recipe.

The dressing is clean-tasting and full of wonderful fresh herbs that provide it’s signature green color.  The addition of vinegar and lemon juice, as well as the sour cream, adds a delicious tanginess.  Don’t shy away from the anchovies; they not only add saltiness but also depth and complexity to the dressing, much like in a classic caesar salad.

Green Goddess Dressing is not only great on green salads, but also on potato or pasta salads. It makes a wonderful, savory dip for vegetables and as a sauce to accompany shrimp, chicken, or poached salmon.

Method:
Combine all ingredients in a food processor or blender and mix well. Taste and adjust seasonings, if needed. Cover and refrigerate. Dressing is best made several hours or up to a day ahead. 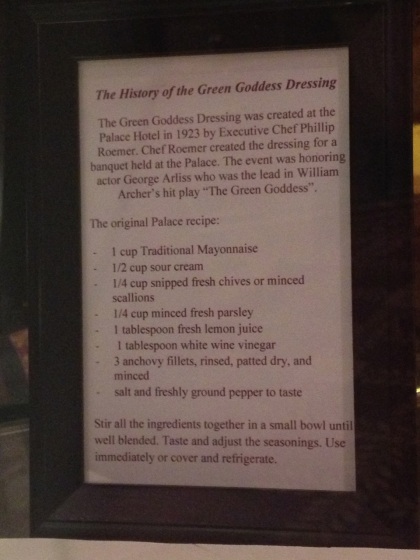 © Daisy’s World. All rights reserved. Unauthorized use and/or duplication of this material without express and written permission from this blog’s author and/or owner is strictly prohibited. Excerpts and links may be used, provided that full and clear credit is given to Daisy’s World with appropriate and specific direction to the original content.

© Daisy’s World, 2011-2014. All rights reserved. Unauthorized use and/or duplication of this material without express and written permission from this blog’s author and/or owner is strictly prohibited. Excerpts and links may be used, provided that full and clear credit is given to Daisy’s World with appropriate and specific direction to the original content.